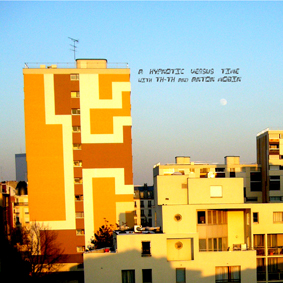 Th-Th (Matohawk) and Anton Mobin, laud both a radical practice of the improvisation. They create an entity which grows rich of the contrast of the numeric treatments and synthesis of Th-Th and Anton Mobin's analogical manipulations. These two approaches converge on a hypnotic and totally intuitive intensity.

A Hypnotic Versus Time is a new improvised session by the two artists, and took place in the Maizing studio in Paris on May 20th, 2009 and diffused simultaneously on the webradio KKWNE.


Th-Th (Marseille-France) :
Thomas Thiery, as an artist, concerns himself particularly with the sound medium. After his physics degree, he continued with his studies about sound and image in the ´ UniversitÈ de Provence ª. At the same time, he got in touch with graphic programming in general, and more particularly with the software Pure Data. Equipped with sensors, he collaborated as a sound programmer for audiovisual installations and dance performances. With Thierry Coduys, he completed his training at the Kitchen in Paris and worked on graphic scores with the help of Pure data and IanniX. Since then, he has focused his sound research on new forms of musical writing.

To continue his work, he particularly relies on free and open source software which give him more open advantages. In 2006, still willing to explore other sound approaches, he directed himself towards improvisation techniques and created the duo Aide Auditive with Mysth-R. Since 2007, he studies Electroacoustic composition in Marseille. In 2008, he created some open project like Blank Pages and Larseneurs.

Anton Mobin (Paris-France) :
Self-taught musician, he turns very fast to an experimental practice with an approach done wonders for the self-confidence on improvised music for an intuitive music. He used to play with the collective H.A.K. and more with affinities; with Ayato in the improvised duet called ìCrash Duo". Very productive, Anton Mobin diversifies all the broadcasting modes for his music, and it is in Internet that he finds an appropriate answer to his bulimia, of the webradio, by way of netlabels, audioblog of Arte, collaborative projects on Internet, compilations... We find him on a large part of these virtual places where the improvised music is going full swing.